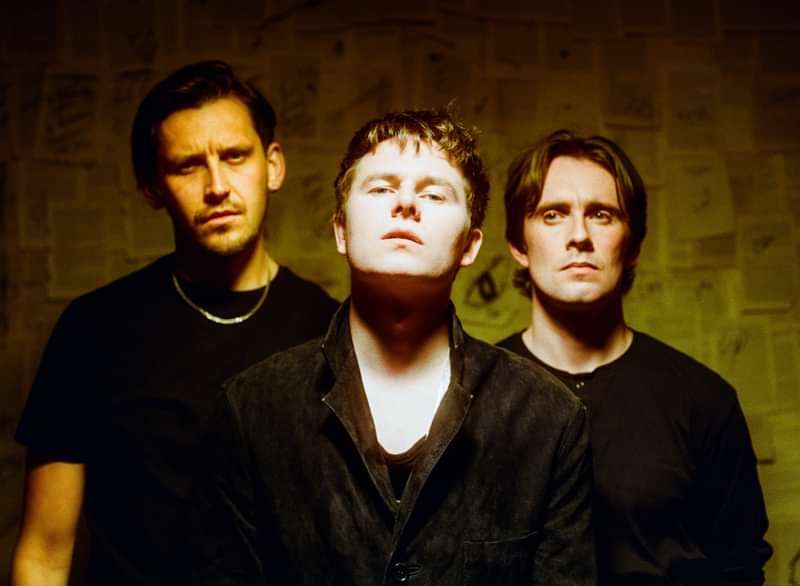 With over 1 million streams on Spotify and over 500K on Apple Music and plaudits aplenty right in the middle of a global pandemic. Think QOTSA and The Pixies with a bit of The Ramones thrown in for good measure.

It’s All There But You’re Dreaming is the culmination of over 4 years of hard work from the post-punk trio, who have been going full pelt since 2016. The 12 tracks delve deep into the world of gnarly, outspoken, real-talk, riff-heavy rock music delivered with maximum authenticity and passion.

Without a doubt one of the most followed up and coming UK bands from the last few years, False Heads have delivered a journey of social subject matters, cultural talking points, political opinions and everything in between. It’s All There, But You’re Dreaming tackles topics that Luke Griffiths, Jake Elliott and Barney Nash have openly talked about in their lyrics since starting out, making this album their own musical timeline.

Having met at Coopers’ Company and Coburn School in Upminster the three members reconvened after University to make music together in late 2015. While all members had collaborated creatively with each other in the past and Griffiths had previously released music under the title, this marked the first time they began to perform together as ‘False Heads’.

While playing at the Black Heart in Camden in November 2015, False Heads caught the attention of former Ramones manager Danny Fields also famous for signing Iggy Pop & The Stooges and The MC5. Fields began to take an interest in and to mentor the band, even declaring that they were "the future of Rock and Roll”.

After releasing a number of singles in 2016 and playing venues including the Roundhouse in July 2016 for the 30th anniversary of the Ramones’ performance, False Heads released their debut EP Gutter Press in March 2017 receiving critical acclaim and extensive radio play, both domestically and internationally being played on Radio 1, recording a live session on Radio X being championed by Iggy Pop on his Radio 6 Music programme. In the United States Rodney Bingenheimer regularly praised the band and played Gutter Press tracks on his Sirius XM shows.

The band also performed at a number of festivals - including Isle of Wight Festival, Y Not Festival, Reading Festival and supported The Libertines on their 'Tiddeley Om Pom Pom Tour' later that year.

In November 2017 the band were included on the bill at “A Peaceful Noise”, a show celebrating the life of Nick Alexander, who was killed during the Bataclan terrorist attack in 2015. False Heads performed alongside Frank Turner, Band of Skulls and Josh Homme at the ULU in Bloomsbury, London.

False Heads were included in The Independent’s list of bands to watch in 2018 and released their single “Retina” via Vallence records in March 2018. The subsequent release of the bands acclaimed EP ‘Less is Better’ co-incided with their appearances at Liverpool Sound City, The Alternative Escape in Brighton, Liverpool Calling, Camden Rocks & InMusic Festival in Croatia playing alongside Queens Of The Stone Age & David Byrne.

In between all this activity the band found themselves in the studio in Cambridge with producer Matty Moon to record their debut album ‘It’s All There But You’re Dreaming’. The sessions over a period of a few weeks proved inspiring, garnering the band a deal with Lovers Music.

Rounding off the year with the release of ‘Slease’ via Lovers Music and a UK Nationwide tour with ‘A’, False Heads prepared for 2020 – Debut Album release year.

It’s All There But You’re Dreaming was initially released on 13th March 2020 right the midst of the beginnings of the global pandemic and only 10 days before the UK went into total lockdown.

The impact on the band was immediate with cancelled appearances at SxSW and New Collosus in New York, their first ever TV appearance in Germany and the debut album tour put into jeopardy.

Emerging out of 2020 with a Joe Cross mix of ‘Twenty Nothing’ taken from their debut album the band have now clocked up near 2.8 million streams and accelerating towards the magic 3 million mark.

False Heads’ reputation is picking up more pace than ever, as their sound reaches ears on a global scale and their unbelievably fearless live shows end up in controlled chaos time and time again -everyone wants to be a part of