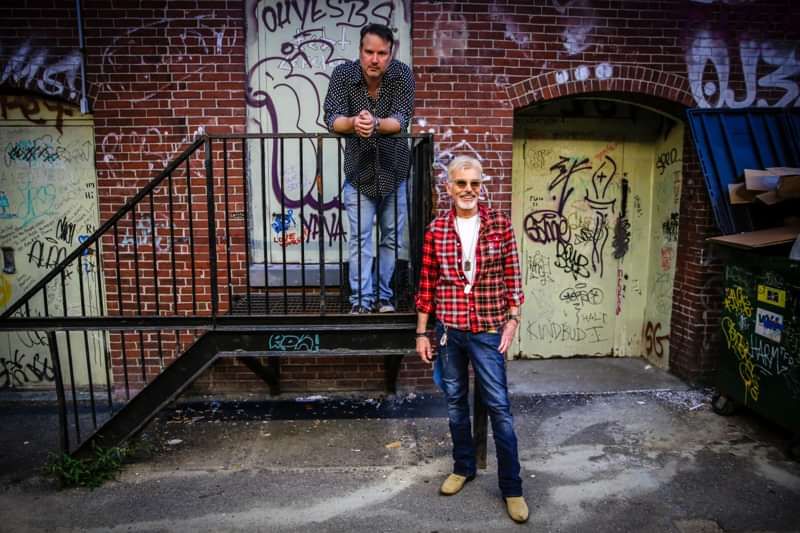 With roots deeply seeded in their love of music that featured strong “story” songs, veteran musicians The Boxmasters (J.D. Andrew and Bud Thornton) have established themselves as one of the most prolific Americana/Roots-rock bands of the day and have built a die-hard fan base performing to sold-out audiences in intimate venues as well as large festivals. Formed in 2007, The Boxmasters have recorded an impressive and diverse catalogue of music that touches on their love of a wide array of influences, but most importantly, the rock and roll of the 1960’s. Listening to The Boxmasters, one can hear obvious odes to the Beatles, Byrds and Beach Boys, but also important to The Boxmasters sound are The Mothers of Invention, Kris Kristofferson and Pink Floyd. Since forming The Boxmasters, several long-time friends have contributed to the sound of the band, but the core of The Boxmasters has always been Andrew and Thornton. As primary songwriters, the sound of the Boxmasters has been an evolution as the duo constantly strive to find new inspiration, new sounds and new ways of expressing what is in their hearts and on their minds. But at the core, there is a backbeat, a lyric with meaning and music played with emotion. Drawing on growing up in rural Arkansas and Kansas with dreams of a mythical place called California that wafted through the radio waves, Bud and J.D. worked their way to the promised land that was Los Angeles to make their fame and fortune. Bud played in well-known regional bands that were playing in front of tens of thousands of festival goers by his mid teens before working as a roadie for a sound company in Arkansas that provided sound services for the likes of The Nitty Gritty Dirt Band and Johnny Paycheck. Andrew started his music business career in Nashville making cassettes of song demos before moving to Los Angeles and working on albums by The Rolling Stones and The Pussycat Dolls among others. But the idea of being in a band themselves always dominated their dreams and The Boxmasters gave them both a place to make music that they loved first and foremost.

The two met when Andrew was brought in to help Thornton record his fourth solo album A Beautiful Door and the two quickly struck up a friendship based on shared experiences and loves. Thornton shared a song by the English duo Chad & Jeremy with Andrew and “Yesterday’s Gone” became the first song recorded for the band that would become The Boxmasters. Hundreds of more songs have been written and recorded in the 13 years since the two met with the desire to make great music only growing stronger with each passing year. The Boxmasters self-titled debut album featured a two-CD collection of original songs and eclectic cover songs. The critically acclaimed album featured the single “The Poor House” which became an immediate hit on Americana radio formats. The fan-favorite “I’ll Give You A Ring (When You Give Me Back My Balls)” was featured in the Sam Rockwell film The Winning Season. Following a whirlwind tour in support of The Boxmasters the band released Christmas Cheer and quickly followed it with their third album Modbilly, a play on the 60’s mod music and influences from southern American rock music that influenced them. The double-CD quickly climbed to the top of the Americana music charts, and was later ranked #14 on the 2009 Americana Music Association’s Top 100 Albums of the Year. Subsequent albums included 2015’s Somewhere Down The Road and Providence, 2016’s Boys And Girls...And The World and Tea Surfing, which featured guest appearances by Jeff “Skunk” Baxter, Kevin Eubanks, and frequent collaborators Jon Rauhouse, Brad Davis and Kirk McKim. 2018 brought In Stereo which further followed The Boxmasters exploring the influences from Sixties as well as putting their spin on a classic sound. As a touring band, The Boxmasters have cultivated a rabid cult fanbase across the United States and Canada. Opening for the likes of ZZ Top, Steve Miller, George Thorogood and Kid Rock The Boxmasters have proven to win over large audiences. As a headliner, frequent stops in Kansas City at “Knuckleheads”, Springfield, Illinois at “Boondocks” and “Merrimack Hall” in Huntsville, Alabama have shown dedicated yet still growing audiences. Two appearances at Levon Helm’s “Midnight Ramble” in Woodstock, New York were highlight performances for the band, as well as the “Ramble at The Ryman” that Levon hosted in 2008. The Boxmasters performed on “The Grand Ole Opry” in 2015, another highlight in a growing resume of must-play venues. The band’s current album Speck found the band collaborating with legendary Engineer/Producer Geoff Emerick for an album that Geoff has called, “One of the most exciting projects I’ve worked on since The Beatles. Sadly, before Speck was formally released, Geoff passed away. Known for taking over the engineer’s chair on The Beatle’s albums Revolver,Sergeant Pepper’s Lonely Hearts Club Band and more, Geoff added a familiar sonic touch to the sound of The Boxmasters, who have been unapologetic Beatles and British Invasion fans. His work on albums by Badfinger, The Zombies, America and Paul McCartney, among many others, have always been huge influences on The Boxmasters. Sonically Speck touches on all of The Boxmasters influences, including The Beatles, The Byrds and Big Star but there are new sonic touches as well. Ukulele, cardboard boxes and the Beatle’s famous “tea towels on the drums” trick pop up on songs throughout the album. “Geoff really did an amazing job on the mixing of this album and did it in a way that you recognize sounds you’ve known all of your life, but at that same time are in a new way. And I really loved being able to sit back and enjoy the mixes of an album instead of sweating every tiny detail of every song,” says J.D., who typically mixes all of The Boxmasters material.

“Lyrically it deals with everything from personal relationships to politics, and social issues. The theme being that we are all specks in this universe trying to navigate it , during trying times in the world we still have our own loves, desires , problems and dreams as individuals,” says Bud. “We're just little humans. No matter what our standing is in society”. In addition to the recording of their albums and touring, the band contributed a cover of “Sylvia’s Mother” to the compilation album Twistable Turnable Man – A Tribute to Shel Silverstein. They also contributed a version of “Little Boxes”, the theme song to the Showtime series Weeds for the show’s second season, and contributed to the score/end title song to the upcoming independent feature film Spare Room, directed by Jenica Bergere. Independently, recently Bud collaborated with Tony Joe White before his passing on his album Rain Crow. J.D. has been active in the Post Production industry mixing the documentaries Iron Will, A Veteran’s Battle with PTSD and It’s Not A Race: The Scooter Cannonball Run.